After spending most of my early fight training days landing on an 8000′ runway at sea level…it was time for something different when the focus of my training turned to cross country trips. 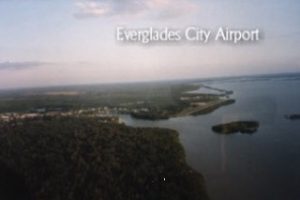 Everglades City, Florida measured out on my sectional chart as just barely over the 50nm cross country requirement. My first trip there was actually my second dual cross country. “Time for some different scenery and something a little more challenging,” said my CFI. So off we went. Compared to the big airport I had become familiar with, this place was tiny! It also had a “hidden” surprise…hidden if you don’t know what to look for.

The unicom operator, who knows a lot about the peculiarities of the area, warned me about turbulence as I made my turn to final.  Turbulence? Huh? Yes, there was a left-to-right crosswind but I sure didn’t feel any turbulence…YET! Mr.. unicom advised me to expect a bumpy SHORT FINAL. Then it all came together. 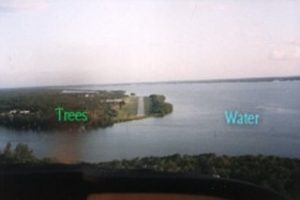 Looking at the photo, you’ll notice lots of trees on both sides of the runway, especially to the left. Trees make for lots of friction that slows down the wind and disturbs the airflow over and downwind from them. Off both ends of the runway there is plenty of water, which does little to slow down the wind. In my case, the winds were blowing from left to right at about 30-50 degrees off the runway heading. The stand of trees disturbed the airflow in just one small segment of the final approach course: Short Final.

A little unnerving for a student pilot with primarily big airport experience (good thing I was with a CFI!) I did managed to get past the “zone of turbulence” right as I crossed the threshold. Closer to the ground I was more protected by the trees. Think of it as the “tree shadow” effect.     Here are some things to think about wherever you fly: 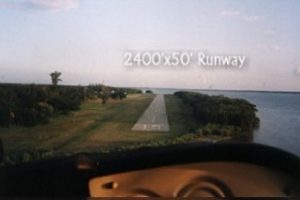 The approach path to each runway, obstacles that the wind may encounter and their impact on the wind. This is especially important on a seldom-used runway since the wind may force you to approach the airport from an unfamiliar direction. Also consider how the wind direction in relation to the runway alignment plays a role in all of this. A right crosswind may be much easier to deal with than a left crosswind, depending on what may be standing in the way of the wind.

One last point: remember that your flight is not over until the airplane has STOPPED. Just after receiving my private pilot certificate, I flew into Naples, FL. It’s a great little airport that has two perpendicular runways and is surrounded by tall pine trees. Well, I successfully negotiated my way to final with a nearly 90-degree crosswind. No problem. As I entered the flare, and entered the “wind shadow” of the trees, I had to remove most of the crosswind correction. Perfect touchdown and rollout… until I approached the crossing runway. Suddenly, there was a crosswind again! No protection from the trees! The wind hit the vertical stabilizer and tried to turn me around. It’s called “weathervaning” and is usually more of a concern for taildraggers than a 172, unless you’re not prepared for a sudden crosswind. I did manage to realize what was going on, applied the appropriate control input and hoped that nobody on the ramp was watching! However, that was just another example of how the “lay of the land”, or in this case the vegetation, can impact your flight…even when you are still on the ground.