Have you ever been caught by surprise, driving your car right into a fog bank? Imagine if you were flying an airplane. Now imagine trying to find your home airport flying above a thick blanket of fog. It’s like trying to nail Jell-O to a wall — it’s just not going to happen!

Fog isn’t just a problem for VFR pilots. Visibility minimums also exist for almost all instrument approaches, so IFR flyers pay attention too! Actually, I believe weather knowledge is even more important for IFR pilots because they fly in it rather than around it.

So what is fog and how does it form? Basically, fog is a cloud that is on the ground. It forms there because the air at the surface has either cooled to the dew point or moisture has been added to the air to make it become saturated. When the air becomes saturated, it can’t hold any more invisible water vapor (a gas) so the vapor condenses into tiny water droplets (liquid). Those droplets are so small, they can remain suspended in the air. If you get millions and millions of those tiny droplets suspended in the air, you have problems because now you can’t see where you are going.

OK, we now know what fog is and why it forms…so HOW does it form and how can you tell if fog is likely to form?

Upslope fog is pretty self-explanatory. It forms when moist air blows “upslope”, forced up by rising terrain. As the air rises, it expands and cools to reach the dew point. Upslope fog is most common over the Great Plains where the terrain gradually rises to meet up with the Rocky Mountains. 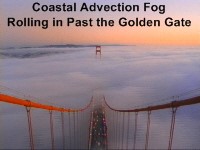 Advection refers to the horizontal movement of air. So advection fog forms when moist air blows over a cool surface. The air then cools to the dew point and fog forms. In the Winter, advection fog is common in the Midwest when a Southerly wind from the Gulf of Mexico blows over the cold land. If you have ever been to San Francisco in the Summer, you know what coastal advection fog is. Moist Pacific air blows over the cooler coastal waters and creates a pesky fog/low cloud deck through much of the summer along the coast of California, Oregon and Washington.

Radiation fog will not make you glow in the dark! The radiation part refers to heat “radiating” off the earth at night. Radiational cooling is most efficient on clear nights with light winds. Because cold air is more dense, the air close to the ground cools to the dew point first, and ground fog begins to form. If the cooling continues (and it does during the longer nights of Winter) the fog layer increases as more vapor condenses.Radiation fog usually “burns off” an hour or so after sunrise, when the rising sun heats up the air, increasing the amount of water vapor it can hold. The fog literally evaporates away. I say it usually burns off, but there are some exceptions. The valleys of the Western United States often see days and days of fog in the Winter. That happens when the fog layer is thick, the weak Winter sun is just too weak to evaporate the fog completely, and an inversion layer above the fog effectively “traps” the colder fog layer down in the valley. That’s a good thing to know if, for example, you’re planning a flight into Fresno for New Year’s Eve (although I could think of many other places I would rather be than Fresno on New Year’s Eve…) The fog could keep you trapped there for days if it doesn’t lift above VFR minimums! (What could be worse than being stuck in Fresno?)

Remember, fog can develop quickly, and it can move in or move out quickly too. Pay close attention to the forecast and METAR observations along and near your route of flight, and avoid making a flying faux pas right into the soup.