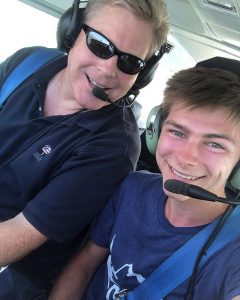 or), I guess I had to take on my first student sooner or later.  It was about a month after passing my checkride when the call came for a CFI to fly a discovery flight in the trusty Cessna 172.

I took the call and that student happened to be Jayden, a 19-year old visiting south Alabama from Missouri.

As you can tell from the picture, he wasn’t having fun at all.

I let him take off, climb, fly down the beach at about 2,000′.  He took a few photos to share with friends, I showed him the four fundamentals during the course of the flight, and we came back for an uneventful landing at Gulf Shores, Alabama Jack Edwards airport (KJKA).

Hopefully, another one is hooked.