Have you been wondering what it’s like to take flight?
To actually take the controls of an airplane?
Check out the view from 2,000 feet above the ground?

A discovery flight is a great way to see if flying is for you.  If you are already a pilot, discovery (intro) flights can be a great way to show that family member, significant other or even interested co-worker what flight training is all about and perhaps even get them hooked. 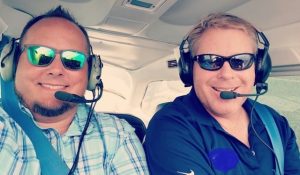 I recently showed Clete W. what flying was all about after he won an introductory flight at a local charity auction.

After a quick 45 minute ground briefing and pre-flight inspection of the aircraft, we took to the skies above South Alabama for a 1 hour tour, introducing him to a different way to look at the world.

When it was time to return to the Gulf Shores airport (KJKA), I took over, entered the traffic pattern and brought the flight to a conclusion with a safe landing on runway 27.

A quick 15 minute post flight de-brief and he was on his way to share his story with friends and family about actually taking control of a real airplane!

If you are hesitant about the time and financial commitment it takes to begin flight training, sign up for a local discovery flight at your local airport so you can see what it’s really like.

Most flight schools will know what you are looking for and many even have special “first timer” packages just for that purpose.